Mer Bleue RUI Study
JavaScript is disabled for your browser. Some features of this site may not work without it. 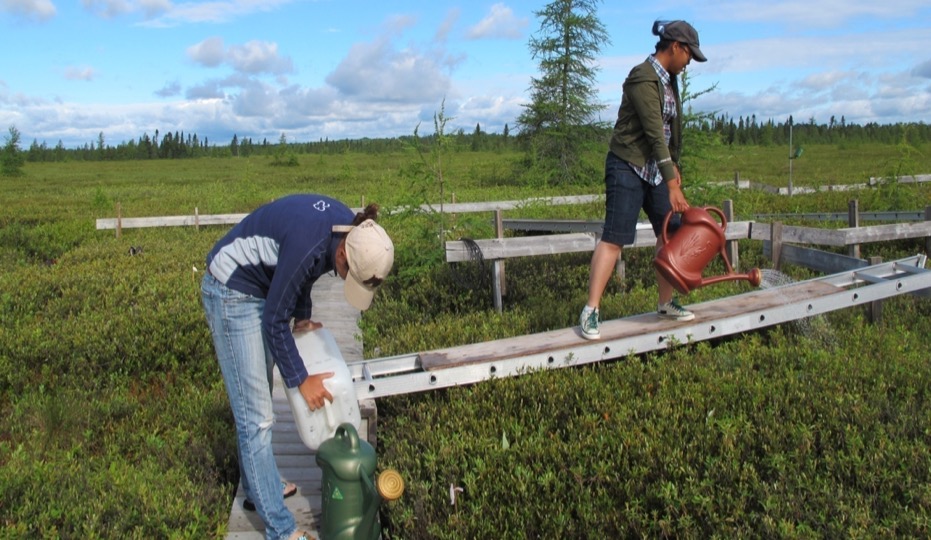 Collections in this community


National Science Foundation Award ID: 1019523
Peatlands are globally important wetlands as they store approximately one third of global soil carbon. Peatlands also cover vast areas in northern latitudes where climate change is expected to be greatest. If the carbon stored in these peatlands is released to the atmosphere in the form of carbon dioxide (CO2) and/or methane (CH4), this release will exacerbate global warming. A very small difference between plant production and soil decomposition often accounts for the annual carbon balance in northern peatlands. Over the long-term, soil carbon accumulates as peat, due mainly to slow decomposition of organic matter in waterlogged and anoxic conditions. Sphagnum mosses contribute to this process as the chemical composition of these plants makes them resistant to decomposition. Bogs, the most nutrient poor type of peatland, are nitrogen and phosphorus-limited because their raised convex surface isolates them from groundwater. Their only source of nutrients is from the atmosphere, primarily dissolved in precipitation. This nutrient limitation inhibits microbial activity in the soil, further contributing to slow decomposition and long-term carbon sequestration.

Fossil fuel burning and agriculture have increased the amount nitrogen (N) and phosphorus (P) in the atmosphere, in forms that plants can easily absorb. Previous studies have suggested that elevated atmospheric N and P have the potential to increase the carbon (C) uptake in peatlands because N and P are important for plant growth. But increased nutrient availability could also stimulate microbial decomposition of soil organic matter. The key issue is whether atmospheric nutrient deposition will make bogs a stronger C sink by stimulating plant production? Or will nutrient deposition have a stronger effect on decomposition, switching these ecosystems from long-term C sinks to net C sources to the atmosphere?

In order to answer these questions, we fertilized a portion of Mer Bleue bog in eastern Canada near Ottawa, Ontario, with varying levels of N and P. Over a 16-year study period, we observed major changes in plant communities, mainly the loss of Sphagnum moss in the highest nutrient treatments. Evergreen shrubs have benefited somewhat from added nutrients, but have not compensated for the loss of Sphagnum. Therefore, total plant production and ecosystem CO2 uptake have not increased. On the decomposition side of the C balance, nutrients have stimulated microbial decomposition of soil organic matter, releasing CO2 to the atmosphere. In addition, the peat surface has been sinking with this increase in decomposition, making the water table closer to the peat surface and the peat wetter. This has stimulated methane-producing bacteria, which require anaerobic, water-logged conditions. In summary, N and P deposition have caused the bog to be a weaker CO2 sink and a stronger CH4 source to the atmosphere, resulting in a positive feedback to global warming.

Our study highlights the importance of long-term experiments. We did not observe lower C accumulation until the 5th year of the experiment, the same year that we observed loss of moss in the high nutrient plots. After 9 years, increased decomposition replaced the decrease in plant production as the driving force in reducing ecosystem C uptake. Sinking of the peat surface and wetter conditions did not occur until the 12th year, and methane emissions did not increase until the 14th year. In the future, the ecosystem is likely to continue to change as plant and microbial communities adjust to the enhanced nutrient supply.

Our international team of environmental scientists has educated many undergraduate and graduate students as well as postdoctoral scholars. We used a cascade mentoring model where faculty and more experienced students helped train the newer students, thus adding new perspectives in teaching. The project enhanced opportunities for women and students from other under-represented groups in biogeochemistry research. These students have had the opportunity to learn state-of-the art field and laboratory measurement techniques, and develop their own scientific studies within the context of the larger project. All of the students wrote and presented their research in theses, national and international conferences, as well as peer-reviewed scientific publications. We have disseminated the results of the research at conferences in North America and Europe, collaborating with other teams of scientists. Atmospheric N deposition is becoming a global environmental problem, and this research has contributed to international scientific discussions, which will help inform environmental policy.

Mount Holyoke College students who completed undergraduate honors theses as part of the Mer Bleue Bog research program under the supervision of Environmental Studies Professor Jill Bubier. All student projects were supported by grants from NASA and NSF.

Rose Smith. 2009. The effects of nitrogen, phosphorus, and potassium fertilization on leaf morphology and photosynthesis processes for evergreen and deciduous shrubs in a boreal peatland.

Collections in this community